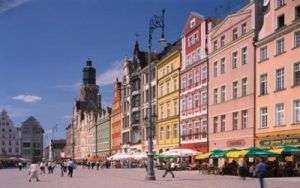 Poland (Polish: Polska), is a large country in Central europe . It has a long Baltic Sea coastline and is bordered by Belarus, the Czech Republic, Germany, Lithuania, Russia (Kaliningrad Oblast), Slovakia, and Ukraine.

Poland was first united as a country in the first half of the 10th century and officially adopted Catholicism in 966 AD. The first capital was in the city of Gniezno, but a century later the capital was moved to Krakow, where it remained for half a millennium.

Nowadays, Poland is a democratic country with a stable, robust economy, a member of NATO since 1999 and the europe an Union since 2004.

PEOPLE OF POLAND: Almost 38,622,000 people reside in the Republic of Poland. Polish is the largest race in this country. The other minority groups are German, Ukrainian, Belarusian and some other tribes. Polish is the official language of the country. However, other languages are also spoken in some regions Population 40 Millions ( 4 Crores )

The reformed 6-year primary school was introduced in the school in the year 1999/2000 on the Implementation of the Education System Reform and is divided into 2 stages: