For IELTS writing task 1, you need to write a summary of at least 150 words in response to a particular graph (bar, line or pie graph), table, chart, or process (how something works, how to do something) the wanted. In the writing task, 1 examiner tests your ability to select and report the main features of the given graph. Therefore, it is necessary to identify the important features and trends in factual information to describe and compare the data. It does not matter how good your English is, but you still need to learn some IELTS writing skills before you do a task. Here in the below-given section, we are going to give you some IELTS writing task 1 sample answers will help you to learn how to answer the Questions of  Writing Task 1 in IELTS with some tips that can be more beneficial for you.

Summarise the information by selecting and reporting the main features and make comparisons where relevant.

The pie charts show the amount of revenue and expenditures in 2016 and for a children’s charity in the USA. Calibration of date is done in percentage.

Overall, the total amount of income was just enough to cover the expenditures. Moreover, donated food made the highest share in total income while the maximum money spent on program service.

To begin with, donated food provided the most of the revenue for the charity, at 86%. Similarly, with regard to expenditures, program services, calculated for nearly all of the outgoings, at 95.8%. The other categories were much smaller. Community contributions were the second largest revenue source, brought in 10.4% of overall income, and this was followed by program revenue, at 2.2%. on the other hand, investment income, government grants, and other income were very small sources of revenue, accounting for only 0.8% combined.

There were only two other expenditure items, fundraising and management and general, with a slight difference both accounting for 2.6% and 1.6% respectively.

NOTE: In your IELTS writing task 1 solution every time, while doing any form of a graph, practice picking out major changes and common trend. 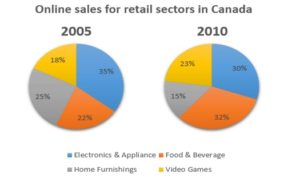 The two pie charts compare the percentages of online sales across different retail sectors in Canada in the two different years, 2005 and 2010.

Overall, the online sale of the electronic item and home furnishing dropped, however, the craze for food and video games increased during the five years.

To begin with, in 2005, the majority of online sales was accounted for electronics and appliance sector with 35%, however, this percentage had dropped to 30% by 2010. During the same five year period, the number of people deciding to buy food and beverages online increased and the transactions went from just 22% to 32%, making it the retail sector with the largest proportion of the online market.

NOTE: In IELTS writing task 1 question answers don’t draw overview that is not supporting the information or different from your explanation. 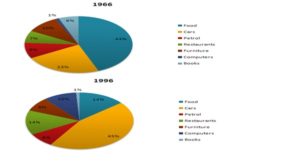 The two pie charts compare the expenses of US residents in two different years in seven categories from 1966 to 1996. The data is calibrated in percentage.

Overall, expenses on cars, restaurant, and computers revealed a positive trend, however, expenses on remaining items showed a decrease in given period.

It is clear that the largest ratio of American citizens spending went on foods and cars. On the other hand, computer and books had the lowest percentage in the chart in 1966 and 1996 respectively. However, the percentage for car rose to nearly double at 45% in 1996. Whereas, the proportion of spending on food fell from 44% in 1966 to only 14% in 1996.

The drastic change was seen for computers it stood at only one percent in 1966 but reached 10% in 1996. There was a two-fold increase in restaurant spending by American citizens, from 7% in 1966 to 14% in 1996. Whereas, a significant decrease was seen for books purchasing. Surprisingly, over a period there was no marked change in the ratio of petrol and furniture.

NOTE: Undoubtedly, for a higher score in IELTS writing task 1 you need to select main features and make comparisons where relevant.

The two pie charts show the proportion of money spent on various household necessities in Malaysia and Japan in 2010. The date is calibrated in percentage.

Overall, the data indicate that in both cases food, housing and other goods and services were the main expenses while both countries spent least on health care.

It can be clearly seen from the chart, in Malaysia the greatest proportion of expenditure (34%) was on housing, while in Japan housing accounted for just 21% of the total. Followed by in Japan the greatest single expense was other goods and services at 29%, compared with 26% in Malaysia.

Moreover, food came at second place in Japan, at 24%, while in Malaysia the actual proportion was higher (27%). In Japan, another major expense was transport, at 20%, but this was much lower in Malaysia (10%). Surprisingly, in both countries, the smallest percentage of expenditure was on health care.

NOTE: The coherence and cohesion of your answer are also assessed in writing task 1. Therefore, in IELTS writing task 1 answers you need to organize your writing.

Summarize the information by selecting and reporting the main features and make comparisons where relevant. 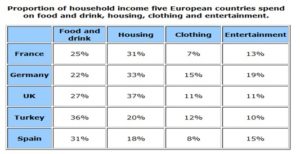 The table chart shows the amount of household income that five countries in Europe spent per month on four items. The data has been calibrated in percentage.

Overall, all five countries spend the majority of their income on food and drink and housing. However, the expense was far less on clothing and entertainment.

It is clear from the chart, housing is the largest expenditure item for France, Germany, and the UK, as all of them spend around one-third of their income on this, at 30%, 33%, and 37% respectively. In contrast, they spend around a quarter on food and drink. Surprisingly, this pattern is exactly the opposite of Turkey and Spain, which spend a fifth of their income on housing, but one-third on food and drink.

Furthermore, spending on clothing and entertainment are the two items which all five countries spend much less. Regarding clothes, France and Spain spend the least, at less than 10% on the other hand, the other three countries spend the same amount ranging between 12% and 15%. Germany spends one fifth on entertainment, at 19%. Whereas, UK and Turkey spend approximately half of this amount.

Summarize the information by selecting and reporting the main features and make comparisons where relevant.

The tabular chart shows the proportion of students attending four different types of secondary school during the period of nine years. The data is calibrated in percentage.

Overall, it is quite evident that out of four types of schools, the attendance of students in three schools showed negative trend while community school revealed positive trend over the given years.

It is clear from the graph, the majority of students were seen in community schools in 2009 with 58% while the least number of students found in specialist schools in the same year at 10%. The eye-catching point of the chart, there was a meager change in specialist school student’s attendance; their attendance remained near about one-tenth in all the three years. The noteworthy point, the student attendance in grammar school showed negative trend as attendance decreased to its half in the end from 24% in 2000 to 12% in 2009. The voluntary controlled school was the most popular school with the second highest attendance in school in an initial year, however; it declined from 52% to 20% in the end.

NOTE: You will be given 20 minutes, which is the best IELTS Writing task 1 time to complete the task. Make sure, you do not skip important information. 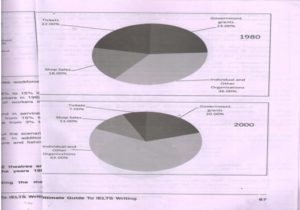 The sources of income of ANZ theatres and heritage trust are depicted by two pie charts in the year 1980 and 2000. Calibration of data is done in percentage.

Overall, the contribution of income from individuals and other organization showed upward trend while all other remaining sources revealed a downward trend.

It is clearly seen from the charts, revenue from individuals and other companies made up about one-third of its income in 1980, which rose by two-fold in the span of 20years. While, the contribution from the government was nearly 25% in 1980, which fell slightly to 20% in 2000. 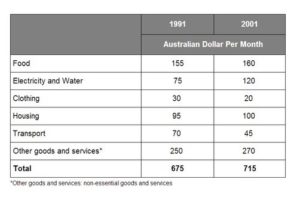 The table shows changes in the spending patterns of an average Australian household between 1999 and 2001. The data is calibrated in Australian Dollar per month.

Overall, the expenditure on food, electricity, housing and good/services showed more or less increase while clothing and transport decreased.

To begin with, the amount of monthly spending on electricity and water saw a dramatic increase over the ten year period from $75 to $120. While in terms of the expenditure on non-essential goods and services, the rising trend was less obvious with a minor increase of $20. At the same time, only five percent rise was seen in food and housing.

However, there was a decrease in expenditure on the other two items. Australians used to spend less than a third on clothing, which fell from $30 to $20. Similarly, the expenditure on transport dropped from $ 70 in 1991 to $ 45 in 2001.

NOTE: You are assessed for the wide range of sentence structure, therefore, use three and four types of sentences in your IELTS writing task 1 answers. 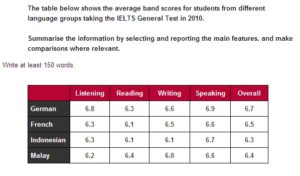 It is clear from the chart, from an overall perspective; German speakers achieved the highest grades with an average score of 6.7 across all four sections. Moreover, French speakers scored the second highest scores overall, closely followed by Malay and Indonesian speakers.

NOTE: Apart from writing skills, highly developed analytical skills are also required in IELTS that you can see in these IELTS writing task 1 sample Answers.

You should write at least 150 words.

The table depicts the information about the sale of eatables and beverages in a coffee shop on a particular weekday. Calibration of data is done in number.

Overall, coffee was the most preferred drink while the sandwich was the least preferred item.

NOTE: Don’t forget to leave at least 5 minutes for revision at the end.